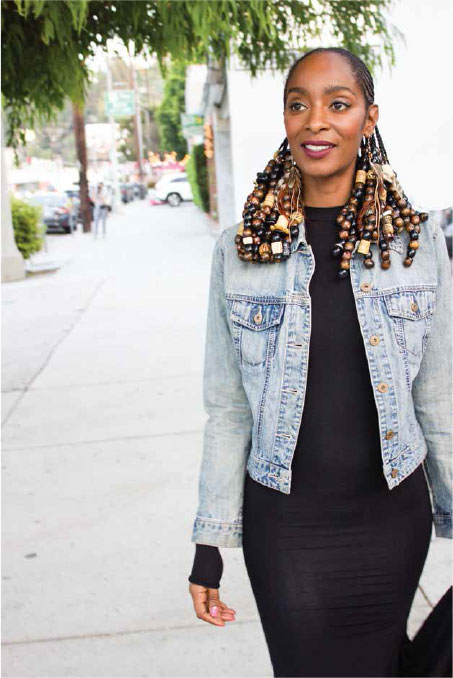 Jeanine likes to mediate way before dawn, work out like a soldier, and shop alone. She prefers rum to wine, jeans to skirts, and likes her heels sky high (except when she’s wearing cowboy boots). Every year she asks her stylist to cornrow and bead her hair in homage to Patrice Rushen and Stevie Wonder (if you know of these artists and understand why demonstrating embodied respect for them is important, you two can probably be friends). She believes in ghosts, fairies, and hobbits (for real). Musically, she vibes to old school everything (hip hop, R&B, jazz, rock, and classical) and especially digs Hildegard von Bingen. She trusts children a little bit more than adults, respects teens for their fearlessness, admires elders for their tenacity, and occasionally prefers the company of dogs to people. Jeanine’s really getting into interior design and has a penchant for acquiring east coast real estate. She is also a survivor of multiple terrors in love.

Jeanine Staples is a Professor of Literacy and Language, African American Studies, and Women’s, Gender, and Sexuality Studies at the Pennsylvania State University. She focuses on dismantling supremacist patriarchies through research, teaching, and coaching. As a sociocultural literacist, Dr. Staples works to understand personal and public voices and stories to solve personal and public problems. She does this by researching the evolutionary nature and function of literacies and texts through the discourses of narrative research. Her work exposes impetuses for various personal and social ills such as racism, sexism, and ableism. Dr. Staples earned her bachelor’s degree in English literature and Urban Education from Howard University, a Master’s degree in Teaching and Curriculum from Harvard University and her Doctorate in Literacy and Language, with distinction, from the University of Pennsylvania. Her research has been peer-reviewed and published internationally. In addition, her teaching has been nationally acclaimed. She is a sought after scholar, educator and coach and has received numerous awards and honors for her talents and professional contributions to the field of literacy studies. These include, but are not limited to, The Ralph C. Preston Award for Scholarship in Teaching and Literacy Research in the Service of Social Justice – The University of Pennsylvania (2005), The National Council of Teachers of English Early Career Educator of Color Leadership Award (2008), The Global Awareness in Teacher Education Award – University of Maryland College Park (2008), and Research Fellow for the Stanford Center on Adolescence (2008). Most recently, Dr. Staples was named a board member for the Africana Research Center at Penn State (2013) and a Fellow for the Social Science Research Institute/Children, Youth and Family Consortium (SSRI/CYFC) (2014). She was also named a Senior Fellow at Columbia University School of Law’s Center for Intersectionality and Social Policy Studies and Senior Visiting Scholar at the University of Rhode Island’s Harrington School of Communications.