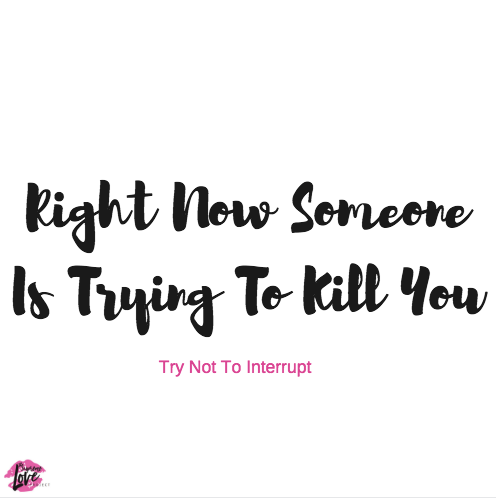 I talk about killing and dying a lot. I realize my preoccupation seems dramatic to some and ominous to others. I’m Ok with that. The criticism doesn’t stop my preoccupation. I understand, from personal and professional experience, how important it is to get to know scary thoughts and feelings very well (and put them lovingly in their place). We need the knowledge (and power-to-put) in order to live more fruitful, peaceful, empathetic lives.

Here’s how killing and dying work:

First: Killing is the initiation of death. It’s active (even when it’s passive). It’s about starting something.

Second: Dying is the process of death. It’s active too (even when it’s passive). It’s also about finishing something.

Here’s another important point to factor in: Killings and deaths increase with intensity (and often, frequency), depending on your identity, developmental stage, resources, and experiences.

When harder kills are triggered inside of you, it looks like your son or your daughter over dosing and struggling to live. The dying happens while feeling the helplessness that comes with that experience and wondering if your child (or you) will survive it.

A very, very hard kill happens when you’re diagnosed with a scary illness and you’re left to figure out what to do. The dying happens while feeling the fear coursing through your body and imagining how it is rebelling against you, failing you, and wasting away. The dying compounds with the realization that there’s little, if anything, you can do about it.

Take all this in. Take it very seriously because, I happen to know that right now, someone is trying to kill you.

If you can, go ahead and die.

Feel every part of the grief of the loss, the offense, the rejection, and accept the elimination. Take your time and do it:Feel the pain. Mourn the loss. Process the energy. Learn the lessons. Release the shock, offense, defensiveness, guilt, shame, and sadness.

Then, get used to a new normal and start a new narrative.

Not interrupting is very important.

Not interrupting does not mean not fighting for a generally healthy relationship, through those inevitable rough spots.

Not interrupting does not mean not standing up for yourself when you must.

Not interrupting means respecting – as often as possible, whether you think they “deserve” it or not, regardless of if you think they’re “right” or “wrong” – the ways people need to move through their journeys, learn their lessons, create objects of disdain, villains, and perpetrators in the scope of their stories, or necessitate the end of a bond for their own health and well being (which, can, with openness, turn into a blessing for everyone involved).

Not interrupting means release. It can lead to new freedoms, if wisdom and courage can be centered in your soul.

In my book, The Revelations of Asher, I talk explicitly about the acts of killing and dying in the souls and bodies of Black women. Whether you read the book or hear me speak, there are a few more things you really need to know about how you’re dying as you’re living (because you’re doing both, whether you know it or not). Get in touch for more insight. You’ll be glad you did.