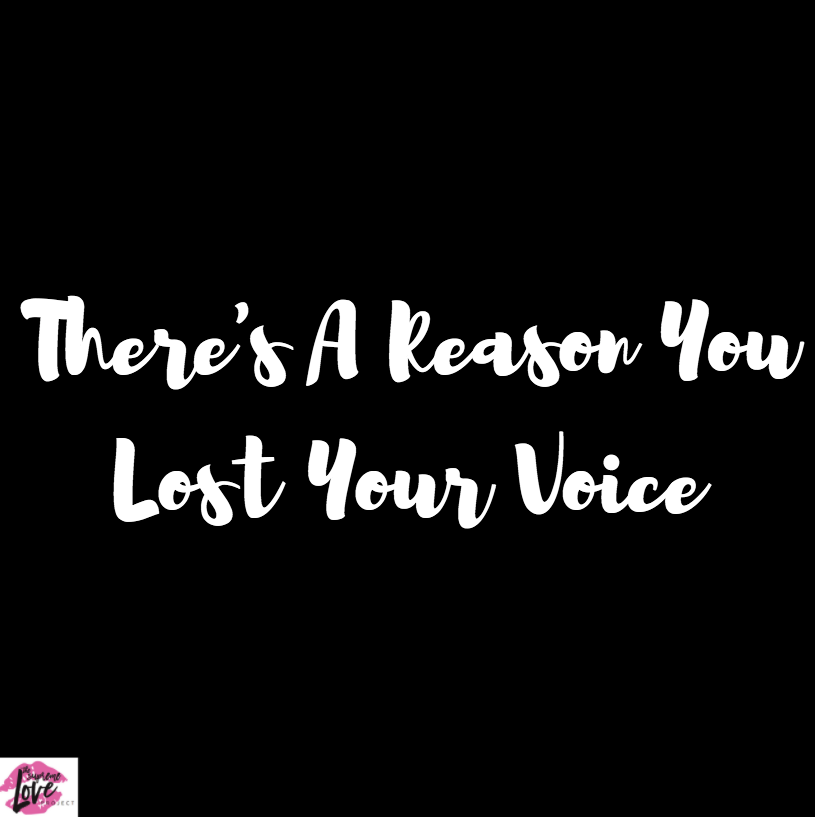 I read your blog post, the one that was published in the Daily Collegian. I read it twice. I’ll probably read it again. I think you are brave in your life and smart in your writing and I hope you continue to try to make sense of the complicated issues you brought up. There’s a lot to explore. As you do so, I think it’s only fair to say, you may be exploring for quite some time. This isn’t guaranteed. It’s just likely. It’s not personal, either. It’s just common. So, as you move forward, I’d like to offer some assurance, in case it’s helpful:

There’s a reason you lost your voice and there’s a way to get it back.

I’ve learned, from my research and life experience, that sometimes we lose our voices before, during, and after sex. It’s something that’s happened, at some point, to every woman I know. It can become a chronic problem. Perhaps in adolescence and early adulthood the loss of voice has something to do with not knowing what you want, or, if you want anything…the kissing, tasting, touching, biting, whispering, weight, and whimsy…with that guy. Perhaps in adulthood it’s about wanting to be close to someone, needing to feel that heat, attempting to mediate loneliness, hoping to impress the person looking at you naked, trying to keep a man at home, trying to keep the peace, or trying to avoid intimacy altogether. Maybe not much of it has to do with life stages at all. I’ve found that the issue of voicelessness knows no bounds. It affects girls and women regardless of their level of education, access to resources, choice of partner, age, socioeconomic class, sexual orientation, race, or ethnicity. I could probably swap the above mentioned scenarios and time frames and retain the central question, in tact: Why do we sometimes lose our words, feel stumped in expression, regress to quietude…nearly speechless…before, during, or after we have sex?

Here’s one (of many) responses (since there is no singular, universal answer):

Even when there is hyper-awareness – awareness of what you’re wearing, what he’s wearing, the ceiling, the bed, the music on the iPad, or the silence in the room, the smell of the cologne, the sounds of the grunting, the location of the exit – it doesn’t matter.

None of that matters.

I noticed, in your writing, that you were just barely aware of this, even though you are clearly very intelligent and deeply reflective. Don’t re-word. You’re not wrong. Don’t worry. You’re not alone. Please know that I am not criticizing or correcting you. Not at all. I know the facts:

Here, I’ll show you. I pulled a few key passages from your blog. They’re the ones that particularly struck me. When I read them, I could hear the knowledge, just short of wisdom and I could see your Self, just not your selves:

So many people can’t figure out why they leave a sexual situation, which often seemed pleasing at the time, with a queasy unease. A lot of it has to do with this odd, permeating muteness that comes over many of us. Sometimes sex hurts, but we suffer it in silence. We want to stop, but we just can’t find the words. We leave a bedroom unsure if we were complicit or violated.

I found myself staring at the wall again, words dying on my breath. I didn’t tell him to stop. I just couldn’t speak. I waited for it to be over.

I want to understand why my voice dies away sometimes. … Even as I suffer it, I can’t understand this phenomenon of silence.

Re: lack of awareness of self.

When your voice can’t be found, it’s because the part of you that needs to speak, the self that needs to speak, is unknown in your mouth and unknown in the world. The least familiar, and most strange, contradictory, complicated part of you has been left unattended. That part of you is underexplored. She is a stranger. So, when that self rises up in relation to any significant social, sexual, academic, political, professional, or familial event, to say who she is and what she wants, she gets lost…lost in the deepest parts of you. She gets disoriented. She loses her way. She has no idea where to go. So, she cannot do what you will: be visible, be brave, be confident, and be certain. She can’t. She has no experience in the world. And, you don’t know her well. You can’t help her.

Re: lack of strength in self.

When your voice dies on your breath, it’s because the part of you that needs to speak, the self that need to speak, is unpracticed in your mouth and unpracticed in the world. The smallest, weakest, most insecure part has been stopped in shadows and laden with weight she cannot bear. That part of you is underdeveloped and insecure. So, when that self rises up in relation to any significant social, sexual, academic, political, professional, or familial event, to say who she is and what she wants, she falls down and back…back to the deepest parts of you. She shrinks. She retreats. She dies on your breath. She cannot do what you will: resist, protest, be strong, and bold. She can’t. She has no force in the world. She has nothing to stand on. So, again, you can’t help her.

But, your voice can be healed.

Your voice can be saved.

The way to get your voice back is to practice self awareness and self strength.

In the research that foregrounds my book, The Revelations of Asher: Toward Supreme Love in Self, I write about voices and stories. I write about how we are essentially fragmented inside. The voices of your fragmented selves – the parts of you that you are unaware of or that are very weak – tell stories inside you. We are comprised of several fragments of a whole Self (I found seven [7] fragmented selves in my data). Each of these fragmented selves has a voice and tells a story. Becoming aware of how they voice and story in your soul will allow you to reclaim your power, so that you are not at a loss for words. Once you do this, your words won’t die on your breath. It’s not too late. There is a way.